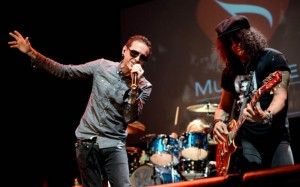 May was a rough month for rock, having lost legendary musicians such as the Doors’Ray Manzarek and Slayer’s Jeff Hanneman. In the hours leading up to the ninth annual MusiCares MAP Fund benefit concert on May 30 at Club Nokia, I thought a lot about the cycle of influence — how one person inspires another, who then goes on to inspire someone else. After speaking with the evening’s performers and attendees, as well as previous and current MAP Fund honorees about the topic of inspiration, I found myself feeling inspired by these stories of courage and perseverance as I took my front-row seat.

With an opening DJ set by Mix Master Mike of the Beastie Boys, comedian Bobby Lee began his host duties for the evening by making everyone laugh. Early Morning Rebel rose to the occasion as the night’s musical openers, playing their song “Lifeboat.”

Red Hot Chili Peppers frontman and previous recipient of the Stevie Ray Vaughan Award Anthony Kiedis introduced the evening’s first honoree — legendary skateboarder Tony Alva, who was honored with the MusiCares From the Heart Award. Kiedis spoke about how Alva gave him a skateboard when he was 21, which he used for transportation, and how Alva took it back when he found out Kiedis was using drugs. Alva then delivered a heartfelt and spiritual speech about his sobriety. Earlier in the evening, Alva told me about a recent trip to Baja California that helped him mentally prepare for the night, and how surfing has helped him connect to the world. In his speech he thanked last year’s honoree, Kevin Lyman, and told a story of how he went from using mostly four-letter words to three-letter words, such as “fun.” Then came a performance from Alva’s Chicken Noodle Soup Project, a jam band with a fittingly distinct surf vibe.

Next up was Norwegian rock vocalist Ida Maria and her band. Performing a three-song set, including “I Like You So Much Better When You’re Naked,” her exuberant energy and shimmery silver-fringe dress uplifted the crowd.

Comedian Andy Dick delivered a series of jokes about sobriety and racism that had the crowd in stitches, leading into the second half of the evening. Linkin Park’s Mike Shinoda introduced the second honoree of the night, his bandmate Chester Bennington, and presented him with the Stevie Ray Vaughan Award in recognition of his support of the MusiCares MAP Fund and his commitment to the addiction recovery process. Shinoda provided stories that illustrated Bennington’s character, including the time Bennington walked out on his own birthday party to record vocals for Linkin Park tracks when he first joined the band. Shinoda spoke of Bennington’s level of commitment to what he believes in, citing a time when the vocalist broke his arm at the beginning of a set in Australia and kept playing. He also touched on Linkin Park’s nonprofit organization Music for Relief, which has launched an effort to help tornado victims in Oklahoma.

“Getting sober is the biggest thing he’s done for the longevity of Linkin Park,” said Shinoda in closing, before Bennington delivered a humble acceptance speech.

“I’m happy to show up and play with my friends if it helps raise money to help people,” said Bennington. “The power of giving is contagious … you can give it away and not lose anything.”

It was an unexpectedly heavy moment for me as Bennington took the stage as the new frontman for Stone Temple Pilots with guitarist Dean DeLeo, bassist Robert DeLeo and drummer Eric Kretz and performed “Wicked Garden.” While it’s been interesting to see how the members of some bands have refigured and reimagined themselves over the years, the songs are the glue that keeps it all together. It may have been a different voice singing “Big Bang Baby,” “Vasoline” and “Trippin’ On A Hole In A Paper Heart,” but the music persevered.

In the finale, the Stone Temple Pilots were joined by Slash and Duff McKagan for a cover of Mott The Hoople’s “All The Young Dudes,” which was written by David Bowie. As I left the building, I remembered some of the various configurations in which I’ve seen these musicians perform. They are the rock icons of my generation, and on this night they joined their rebellious forces for a good cause.

If the GRAMMY Awards is Music’s Biggest Night, the MusiCares MAP Fund benefit concert is music’s most compassionate night.